Topik A: Health System and The Economic Development in
The Changing Disease Pattern in South East Asia

Prof, Supasit explain that, this forum was a collaboration from three countries, Thailand, Malaysia and Indonesia about knowledge dissemination.

"The Epidemiology in South-East Asia Countries Indonesia: The epidemiology trends in SEA countries, the environmental issues and the needs for integration policy." 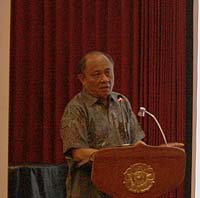 Prof. Hari KusnantoToday begins the presentation by Prof. Abdul Kusnanto with research citing Omran (1971), the three stages of modernization which are classified by cause of death: (1) Pestilence and famine; (2) receding pandemics; (3) degenaritve and man-made disease.

Hundreds of years ago the world was dominated by disease-related diseases such as diarrhea, pneumonia, malnutrition, tuberculosis and malaria, the disease has been reduced but still occurs in some parts of the world for some time. The story continues with a history of disease that had plagued the world like a plague and bulbonic pestis. The world is moving towards the direction of improvement that reduces the pandemic of these diseases. The improvement related to sanitation, personal hygiene, nutrition, antibiotics and the development of medical technology.

Shifting patterns of disease the world has shifted to the passage of time the diseases due to lifestyle such as diabetes, cardiovascular disease, and so on. Scientific articles by Olshanky and Ault (1986) also discussed, namely an explanation of the stages of human life expectancy and its threats as a result of his death, for example when a human life expectancy in the range of 30 years, the pattern of deaths from Pestilence and famine, while when the life expectancy in the range 70 years the mortality patterns ranging predominantly degenerative diseases.

Presentation of the movement continued life expectancy of Southeast Asian countries, where there is a demonstrated consistency and there that show upward movement. This was followed by an explanation of the actions of health interventions that need to be done, has shown benefit, and that cannot be used anymore.

At the end of the presentation, Prof. Hari Kusnanto explain the premature coefficient and life expectancy. Day explains some related studies and the positions of the countries of Southeast Asia related to it. 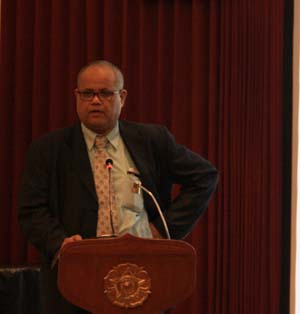 Prof. Syed aljunidPresentation of Prof. Syed Aljunid describes how he observed UHC applications globally, which 192 countries have UHC implementation issues . He began with an explanation of what is UHC, in which he explains that the UHC is a society have equal access to health services. Then proceed with the three dimensional aspects of UHC and also aspects that affect UHC.

UHC three important aspects, among others : effective and efficient services, prevent uncontrolled spending and everyone gets equal access. Keywords UHC is not only achievable but also achieve sustainability. In the ASEAN region, Prof. Aljunid explained that the significant growth in developing economies over the last 10 years, but there are still economic disparities between countries .

Health-related industries are also discussed, where they play an important role in achieving UHC, for example, the discussion of UHC in positioning the private sector in SHI schemes, such as hospitals and private clinics that continue to grow with the profit motive.

Discussion on state expenditures for health are also being targeted by Prof. Aljunid, especially how different inter regional in the world, for example the difference between developed countries and developing countries.

In conclusion UHC is the target set by developing countries, health reform is still needed to achieve UHC and health financing is an important aspect of the UHC.

"The tiers health care system: is it global phenomenon?"

The presentation begins with an explanation that health systems in low-income countries are generally fragmented and terstrata, while various sub populations using various kinds of access also to reach health care providers. More typical is the individual health care provider usually run more than one place of practice and health care providers in developing countries varies from very simple to modern. He also explained with examples, example in the target market of health services in Zambia,

Prof. Barbara continued the presentation by discussing a book that explores the issue of private health care providers. There are several categories including, among others : ( 1 ) involve the private sector with very minimal formal profit to moderate; ( 2 ) more portions for the formal and informal private sector in primary care, while the tertiary service sector dominated by the public; ( 3 ) significant involvement of hospital formal private hospitals; ( 4 ) the public sector to encourage private sector development.

In Jakarta, UHC good for society but not good for the people of Papua. Do we need to postpone the UHC to achieve equality of health service providers in both areas?

Then the second, Prof Syed Aljunid mention there stagnation in private healthcare providers, while private hospitals in Malaysia many target markets of Indonesian society, how did he respond?

The idea of following the money, especially at State facilities health facilities is uneven, in fact not only in Indonesia. Obviously Indonesia needs acceleration sacret budget for health care, especially in remote areas.

The private sector in Malaysia is different from Indonesia and Thailand. In Malaysia are not allowed to dual practice, should choose to work in the public or private sector. There is a target market, namely the rich, the second they are not satisfied with the health services provided by the government, and the latter targeting for medical tourism. They have to work hard and compete in quality and efficiency. One of the reasons is the material for cheaper production from Indonesia, who made a private hospital in Malaysia to compete, related to Malaysia very competitive prices.

Inviting Wanichai to talk about the situation at the Siriraj hospital.

Siriraj Hospital is an academic hospital to Mahidol University. Siriraj Hospital also has private services where the profit generated divided to serve those who are poor in the public service. While the share of health care workers as well.

What about the quality of the data generated from the ASEAN region ?

We have a problem related to the data, since the Suharto era, for example, different data regarding universal coverage for the immunization program. Statistical data are generally derived from the Central Statistics Agency (BPS) and Susenas. With UHC, Hari hopes of the poor can also enjoy the health services. There are a lot of issues, not only in Indonesia, such as in the U.S. there is the issue of restrictions on the use of certain anti-hypertensive drugs. If it's done well in Indonesia is also very possible. My hope, the poor can also pursue a life expectancy .

When we have reached UHC , what could be developed further? Growing problem in Malaysia today are chronic diseases are not contagious, for example, how to control diabetes. Other issues associated with information and IT use in the development of health services. We already have a blueprint of telemedicine has not been achieved yet.

We also still have a problem with dispensing as Indonesia and Malaysia.